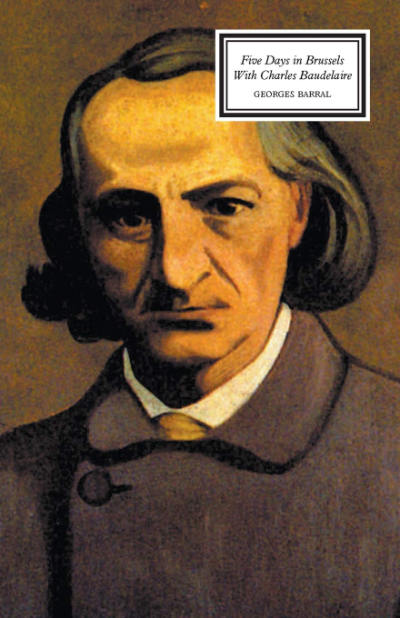 In the fall of 1864 Georges Barral’s job brings him to Belgium, where he meets and befriends the author of Les Fleurs du mal. Over the next five days, Barral listens as Baudelaire expounds on a variety of subjects, including the merits of his pet bat, Burgundy wines, ginger bread, and the proper preparation of an omelette. The French poet also discusses his feelings for Victor Hugo, Napoléon, and the Académie Française.

During their time together, Baudelaire and Barral travel to see the battlefield at Waterloo, accompany Félix Nadar and Dumas fils on a visit to a brothel, and tour Brussels’ lower town, where they stop to contemplate Manneken Pis.

This account first appeared as a series of articles in Le Petit Bleu magazine. When Barral died in Brussels in 1913, he left his notes to the Belgian poet and professor Maurice Kunel, who republished them in 1932 under the Vigie 30 imprint as Cinq journées avec Charles Baudelaire à Bruxelles.

Georges Barral was born in Paris on January 2, 1842, son of the agronomist Jean-Augustin Barral. Although he had trained as a chemist, physiologist, and lawyer, Barral earned his living primarily as a journalist and writer. He authored the biographies of several men of science, including his friend Dr. Claude Bernard in 1889, Lazare Carnot in 1890, and Gustave Trouvé in 1891. Barral moved to Belgium in the early 1900s and died in Brussels on May 9, 1913.